Is considered one of the most bio-diverse countries in the world due to the high diversity of their natural species. The country has around 23.056 taxonomic species of animals and plants reported, which constitutes the 6.1% of all species reported worldwide. This biodiversity richness is determined by its geographical, atmospheric and climatic location and conditions and represents an important economic and commercial source, especially for the communities living and relying on this mean. Besides that, the country’s economy is based on non-renewable resources such as oil, and on traditional agriculture such as the production of bananas, shrimps, cocoa, flowers and fisheries. Source: BIOFIN. 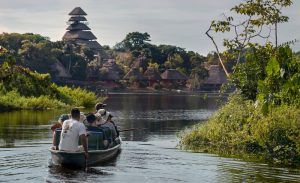 Ecuador is one of 17 megadiverse countries in the world. In addition to the mainland, Ecuador owns the Galápagos Islands. This is what the country is best known for

Ecuador has 1,600 bird species and 38 more endemic in the Galápagos. In addition to over 16,000 species of plants, the country has 106 endemic reptiles, 138 endemic amphibians, and 6,000 species of butterfly. The Galápagos Islands are famous as the place of birth of Darwin’s Theory of Evolution. They are a UNESCO World Heritage Site.

Many different kinds of potatoes and corn are grown in Ecuador. There are also large banana farms. On the coast, many people eat seafood and fish. Cuy (guinea pig) is a famous indigenous food that means guinea pig.

Ecuador is located along the equator. There are jungles and mountains such as the Andes Mountains. Ecuador has many active volcanoes and also one of the highest densities of volcanoes in the world. On the coast of the Pacific Ocean there are beaches.

The capital of the country is Quito. This city is high up in the Andes, which makes it hard for some new visitors to breathe. The biggest city is Guayaquil on the coast. Cuenca is famous for its old buildings and colonial architecture. 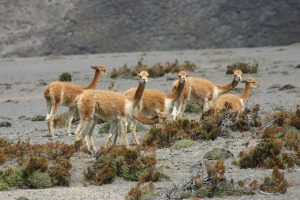 The official language is Spanish. Many other indigenous languages are spoken. Most of the people in Ecuador are Roman Catholics although Ecuador has religious freedom and people can follow any religion, they choose.

Climate: Ecuador is a country of variety. Its climate and landscape vary from one end of the country to the other. However, it is hotter and more humid along the coast and in the Amazon jungle lowlands than it is in the mountains.